Discovering my voice ….Work in progress

I was born in Manchester UK, from a working class background, during an era that was still very much influenced and affected from the aftermath of the second World War… relied heavily on past Victorian glories…An Image of Lowry matchstick men… going about their day to day activities.

I am a Designer & Artist who specializes in Floral and Decorative Surface Art. My passion for flowers is quite often a common theme in my work., but I have other passions which perhaps exist from of my memories of childhood and growing up in a city which had lost its identity after many years as one of the most important Textile and First Industrialized City in the World. Textiles has always been a passion , the industry, the mills, the printing machines and acres of cloth destined for homes and garments. My other passions which include a love for Urban environments, people and behavior which do not appear in my artwork at the moment but is very much work in progress. A vehicle for my photography maybe.

My style is not minimalist, it is definitely maximalist. I love color, lots of pattern, bold and strong shapes, curves and quite often detail. And I enjoy working on large scale projects. Future ideas may include the surreal but I hope with humor and showmanship rather than the sinister. 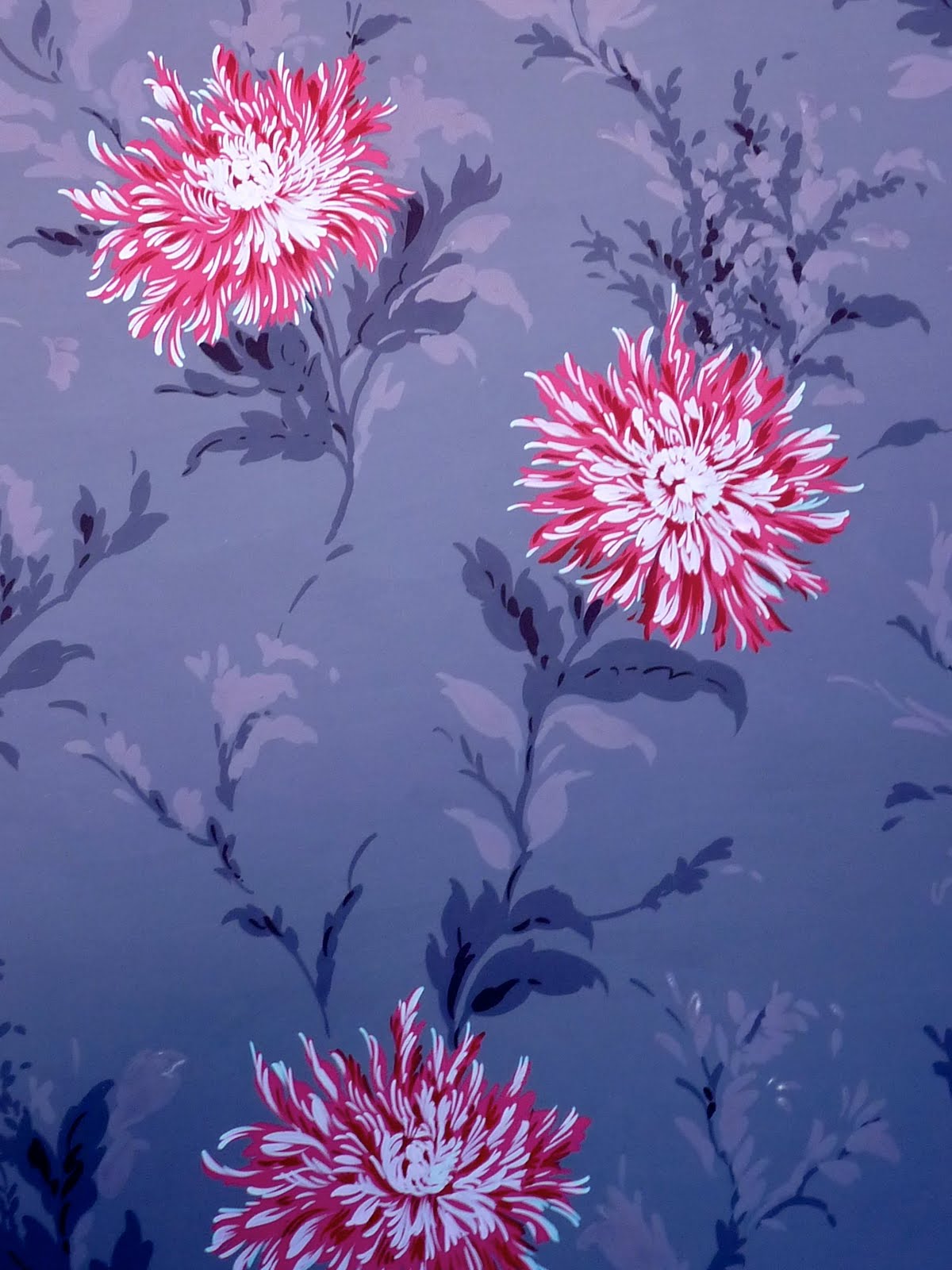 At the moment I am using Gouache and Acrylics but soon shall experiment with mixed media, collage and perhaps incorporate digital images, further work in progress.

I suppose I should explain how I came to be here. my background and my influences which are many… this is a journey where I still have not reached my destination. That is why I have named it Work in progress. 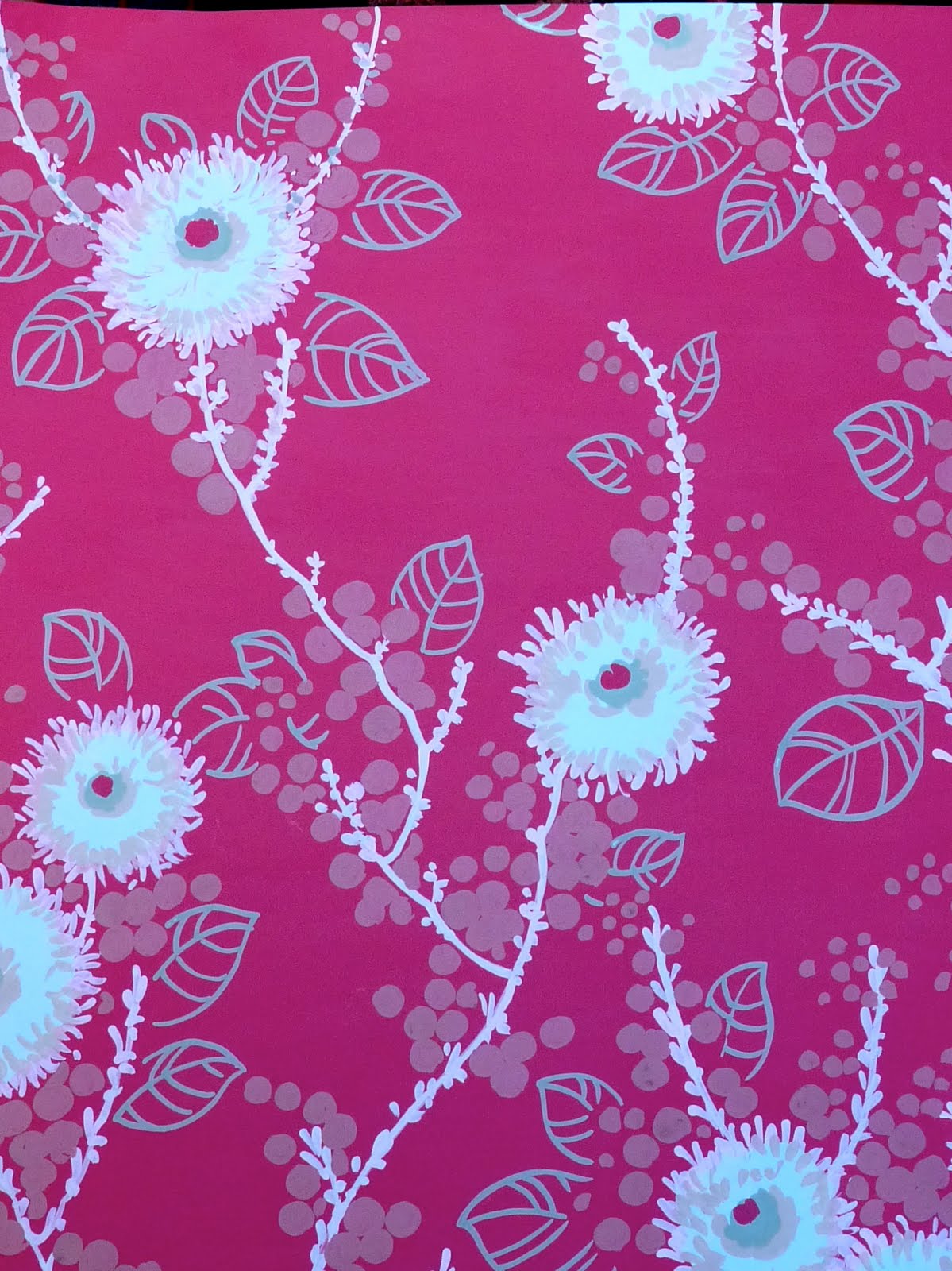 Memories of childhood was fun even though it was probably like a scene from the British Realist cinema of the late 1950s to 60s such as Saturday night and Sunday morning. We called Kitchen sink dramas… all Black and white… dreary and depressing. Not much future for someone from a working class background…ambition was never encouraged and one could not hope to escape from the life your parents had. I also lived in Black and White , but always saw the purple flower growing in between the rubble of the demolished slums my sister and I used to play on… I always saw the sunlight breaking through the clouds which wrapped around the Victorian Prison Tower aptly called Strange-ways… And I always saw the yellow shimmer of the street lights trying to burn through the smog from those Dark Satanic mills during the damp and cold winters as mum dragged us to the shops… Sounds quite romantic and possibly exaggerated but entirely true…

I painted from an early age and during my days at school always had in mind that I wanted to be a painter or a Fashion Designer. Growing up with a Catholic school education and the background music changing from Mod to Glam rock and Reggae to Northern Soul progressing to Punk as I got older, music was and still is a passion and an influence.

I went to college to study Fashion Design but left after a couple of years to train as a Textile Designer within one of the many Studios in Manchester and was lucky enough to have many visits and further training in the French Ateliers in Paris and Lyons, Como in Italy and connections to studios in Krefeld in Germany.

These studios taught design in the old apprenticeship method… starting with the basics of pencil drawing and tracings, progressing to color work and repeating designs to full on creating originals… there was a strict hierarchy within the studio…the head designer would get his work completed by a junior and less creative designers may spend their whole careers as finishers and/or colorists. Designers would be hidden away and only the owner or head of design would see the clients in the showroom as poaching of designers was very common and designers also tried to do work on the side… 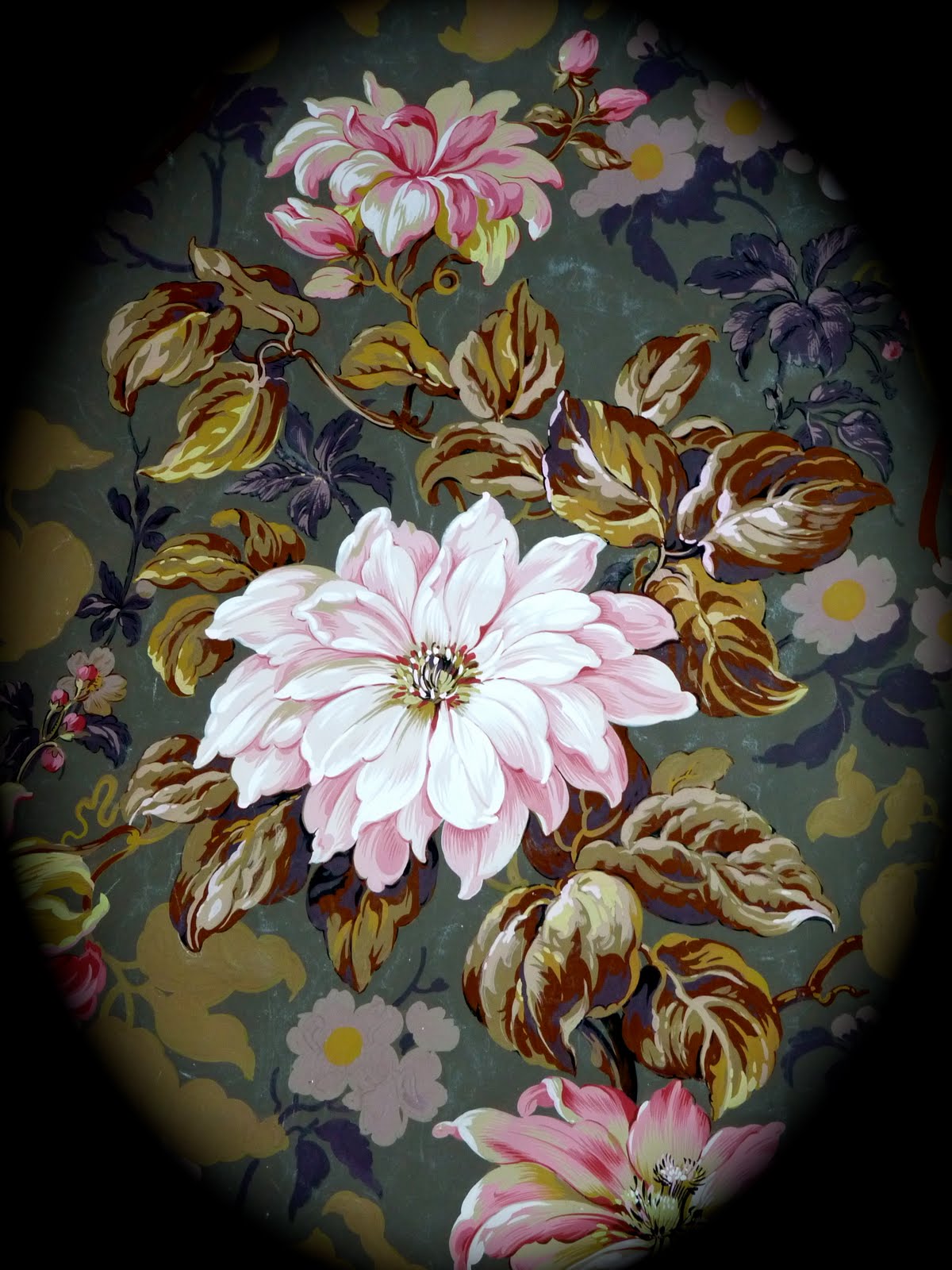 Influences during this time would be the Pioneers of the Arts and Crafts Movement where I would be in complete amazement at how these artists such as William Morris could produce so much work in their lifetime. C.R. Mackintosh and his style of Art Nouveau, and of course the Pre Raphaelites with one of the most iconic paintings Works by Ford Maddox Brown being an early influence as I used to see this picture as a child in the Manchester Art Gallery. Other enduring influences included the Symbolist illustrators like Aubrey Beardsley, Sulamith Wulfing and others.

My years working in the Independent Design Studios ran parallel to working within a Manufacturing environment both in the UK and overseas, which in the early days included South Africa and Zimbabwe and more recently Pakistan, when the Manufacturing all but disappeared in the UK. These manufacturing industries consisted of Printing,dyeing,finishing and makeup of the product which was usually textiles for the Home and also wallpapers. The studio days and the learning of my trade was probably one of my happiest times. My true influences were forming; the French Decorative arts…. Redoute, the Botanical artist… the Dutch masters especially the Dutch Floral Painters, Acrimboldo, whom I have always loved, and so many more. I also became very interested in Ethnic and Tribal Art, briefly doing some designs for the West African apparel market which traditionally quite often was produced in Holland, UK or France. Imi Batiks as they were known [imitation batiks] … or Indigos….and a very short time working in Sri Lanka on authentic Batiks. 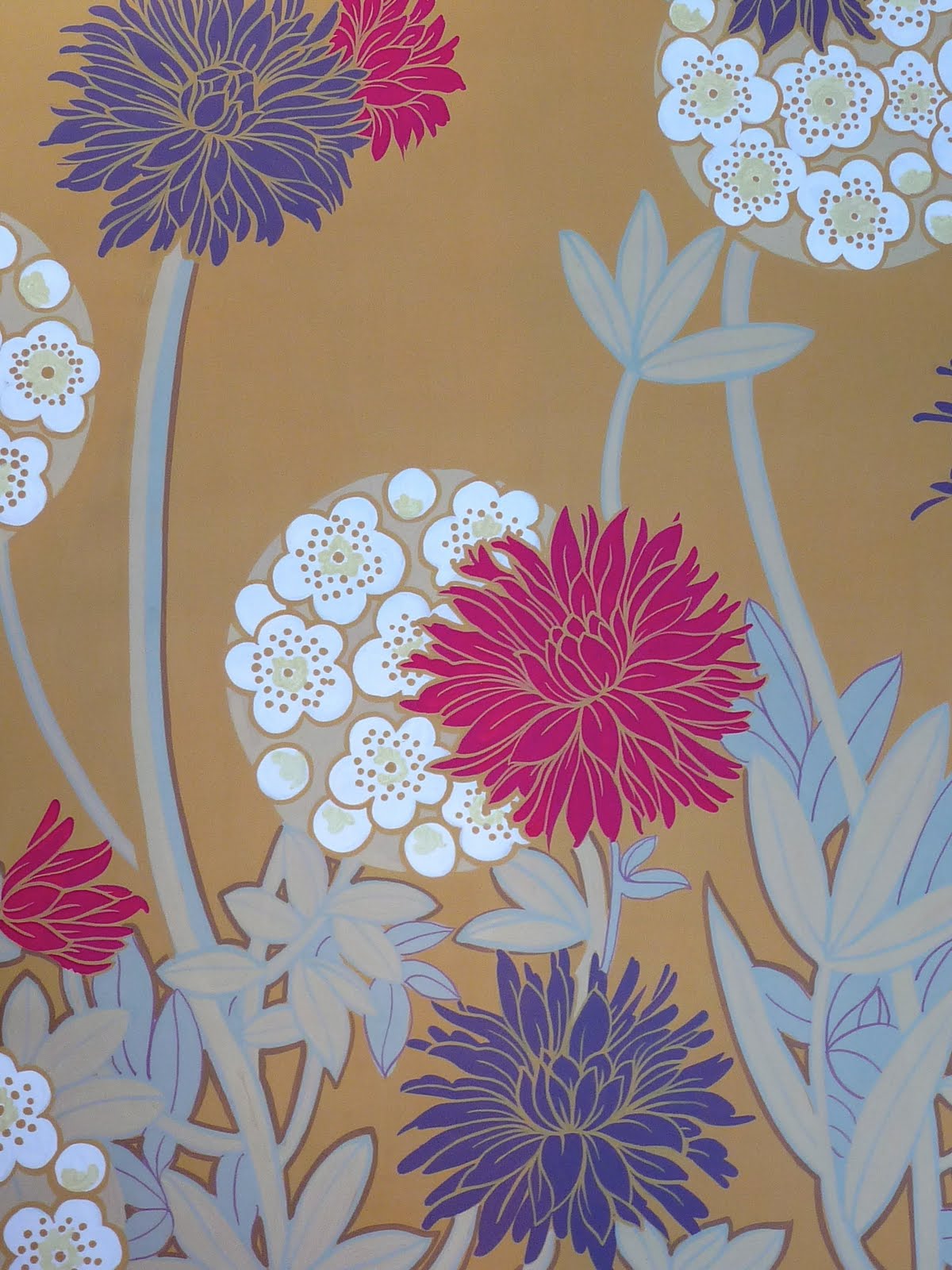 Then the Champagne 80s arrived and my lifestyle reflected it. More travel to more exotic places, Brazil, Bangkok, Hong Kong… as well as Las Vegas, San Francisco and New York. Not to mention endless visits to London and Paris taking in a Gallery and Show almost every week…Cruises on the Caribbean…glamorous European cities like Rome, Madrid, Vienna. I was very interested in the Viennese Secession movement…beautiful decorative Klimt, Toorop and even the slightly disturbing Schiele more influences….and more art forms to work on….the World is full of Treasures.

During the years of the 90s I was studying the history of Modern Art ,as an evening course and I became interested in Modernist architecture and furniture designed by Le Corbusier and his contemporaries… Industrial design, Bauhaus. Art Deco. the Russian Avant Garde, Cubism, all geometric forms. What was not to love? More Work in progress?

After I returned from 2 years living in Pakistan where I worked for a Textile mill, setting up a design studio, training local designers and creating collections for International markets. I decided to leave the Industry and I took a short course on Interior Design. Over the last 6 years or so I had been working as an Interior designer, creating color schemes, styling Window Dressings , general furnishings for the people that could afford the service. But I was using fabrics and wall papers that I used to design and I started to grieve for the actual designing and painting of the product so in the Autumn of 2009, I made the decision to create my own working lifestyle to see where it would lead.

I now live in a English cottage in a small village in the North of England. An area which has so much natural beauty and is not far from the Famous Roman Hadrians wall and with a nearby coastline which boasts Castles every

few miles… Beautiful Bamburgh Castle overlooking an unspoilt beach and the sea. A far cry from the dark days of the city in the 70s. However at least once a month I am lured back to that urban environment in order to breath in the slightly cleaner air than of past and regenerate and stimulate my creativity so I can move on to the next exciting venture.

What is in store for the future.? I have many ideas and I am bursting to realize these Ideas. just scratching the surface at the moment. I shall expand on the Passion flower theme and more Floral Stories, some of my art shall incorporate textile patterns, modular ideas, and more decoration with a little geometry and ethnic influences… Perhaps a surreal twist and some symbolism, photographic images as well… watch this space.

I thank you for listening to my voice, where I am still trying to discover the full vocabulary and even the language as well, as all this is still very much a Work in progress.

Curated by Art of Day, TwitterFirstFriday creative exhibitions reach an even larger audience through Facebook and the TFF Gallery Edition newsletter. This exclusive publication features only the highest caliber art from each event. In addition, subscribers receive the always new and exciting Friday Night Artist Features! Make sure to subscribe!